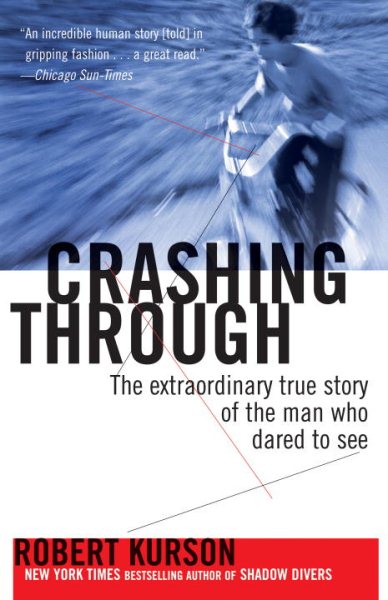 This quote embodies this suspenseful and highly insightful look in to the inspiring life of Mike May. At three years of age, May’s sight is instantly taken from him in an explosive accident. From the beginning, he doesn’t let that stop him from achieving most everything he sets out to do. Sometimes, with humorous, dangerous, heart-warming, interesting or successful consequences. Mike May just keeps “crashing through”. At times, quite literally!

People who doubted May's abilities, just fueled his desire to overcome challenges even more. He attended a mainstream school and college, went to camp, played flag-football and soccer, rode horseback, windsurfed and competed in down-hill race skiing at 65 miles per hour (with a non-tethered seeing guide) on the U.S. Olympic team and set records in the process. In his professional life, May worked for the CIA, assisted in building schools in Ghana, was the entrepreneur of a successful business, gave public presentations in front of large groups and even met President Ronald Reagan.

At the age of 46, after a chance encounter, May is given the opportunity to participate in an experimental procedure to regain his sight. He struggles with the decision to undergo the surgery for several reasons. He has been happy and successful as a non-sighted person and there are heavy risks. Eventually, he crashes through and has surgery, which partially restores his vision. It's so easy to take the ability to see for granted. I was amazed at all the insights I gained by looking through May’s new eyes! Some of which include, his having to learn how to distinguish between males and females and shadows and solid objects, which is particularly difficult on stairs. His first car ride home from the medical facility is especially panic-inducing because he thought every shadow on the highway was an obstacle the car was going to collide with. When he sees his wife and children’s faces for the first time it is heart-warming and emotional. I really enjoyed how his children and wife helped him navigate his way through new challenges.

Eventually, events happen that make him have to choose between continuing to have sight or slowly go blind again. You’ll have to read for yourself to see what he chooses. I’m really grateful to Mike Mays for sharing this personal and inspiring story.