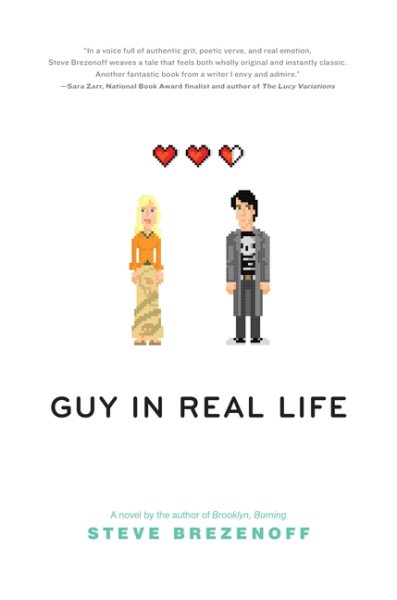 So you read "Eleanor and Park" and you're looking for something similar. Look no farther, as I have your next read right here! Steven Brezenoff's "Guy in Real Life," is an excellent companion to "Eleanor and Park."

Lesh is into heavy metal and black dusters. After a Labor Day metal show, he drunkenly smashed into Svetlana...no worries, he's walking and she's riding a bike. Even though he knows nothing about her, Lesh is captured by her. After being grounded for drinking at the show and coming home drunk, Lesh's best friend Greg talks him into trying the MMORPG (Massively Multi-player Online Role Playing Game) he's into. After tying out a character Greg creates for him, Lesh secretly creates another character based on Svetlana and starts playing with two other characters he's met online. Here's where the fun begins. You see, Lesh's playing a girl, when really he's a G.I.R.L. (a guy in real life, get it?). Things get more complicated when Sevetlana starts sitting with him at lunch and he starts to get to know her. She's into a different geekdom than he is: Classical music, Bjork, embroidery and being the Dungeon Master for her school's role playing club. Add another player, who has a crush on Lesh's character online and a boy with a crush on Sevetlana in real life, and you have the makings for a fun story.

Lesh's and Sevtlana's stories are told in alternating chapters, with the occasional chapter by Lesh's version of Sevetlana inside the MMORPG. Tensions build as the story gets going...there is the "Will they or won't they?" between Lesh and Sevtlana, the tension caused by both Lesh's and Sevtlana's families and the added layer of suspense added by the choices both Lesh and Svetlana make as they negotiate the halls of their high school. Will the gaming club survive as a legitimate school club? What will happen if Svetalan finds out about Lesh's character?

While the writing isn't as engaging as "Eleanor and Park," "Guy in Real Life" satisfies that need for something like "Eleanor and Park." The subplot about Lesh's online crush was handled well, although (SPOILERS AHEAD!) I found it a bit hard to believe that this online crusher actually lived in the same city and was able to deduce who Svetlana really was and mistake her for playing herself in the game a bit much. The author did a fairly good job of planting hints, but Svetlana's real life crush was too much of a red herring for me to get around. I also loved that the setting of St. Paul got to be so much of a star, as the city often suffers in comparison to it's big sister, Minneapolis. All in all this was a satisfying read that I really enjoyed. Definitely a great realistic novel to start off your summer.