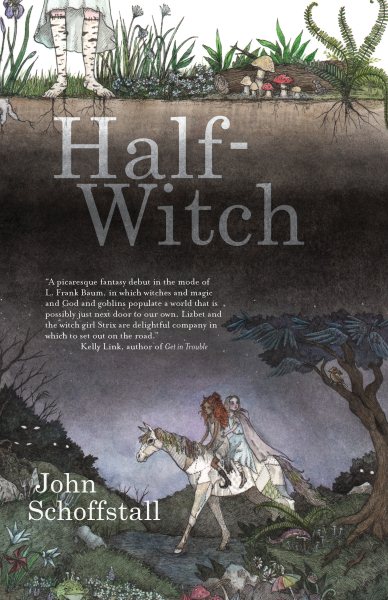 Lizbet Lenz and her father Gerhard, a very unsuccessful magician, are always moving from town to town, usually quite speedily before being thrown out. Her father’s spells always seem to turn out wrong so they are forced to flee, but when they arrive in Abalia, Lizbeth, desperately tired of all the moving, really hopes they can stay. But after yet another series of spells gone wrong, ending with a spell causing Abalia to be rained on by mice, her father is quickly thrown into prison.

Frantically trying to escape a male predator, and desperate to discover how to get her father out of prison, Lizbet makes a deal with a witch and reluctantly accepts the help of her strange witch-girl/apprentice, Strix. Her/their seemingly insurmountable task is to cross the foreboding Montagnes du monde mountains, which no one has ever done, and retrieve a magic book as a ransom for her father. Lizbet and Strix face a harrowing journey, replete not only with natural barriers but also danger from offensive, smelly goblins eager to kill them, horrific devils trying to take dominion over Heaven and the world, plus witches and assorted criminals.

This engrossing teen novel is adventure fantasy at its strangely, unusual best. Half-Witch is inventive, creative fantasy with looming questions about the power of faith, friendship and love in a crazy, mixed-up universe. While perhaps not for everyone, this quirky novel is a well-written bit of wild fun.