If You Want a Friend in Washington 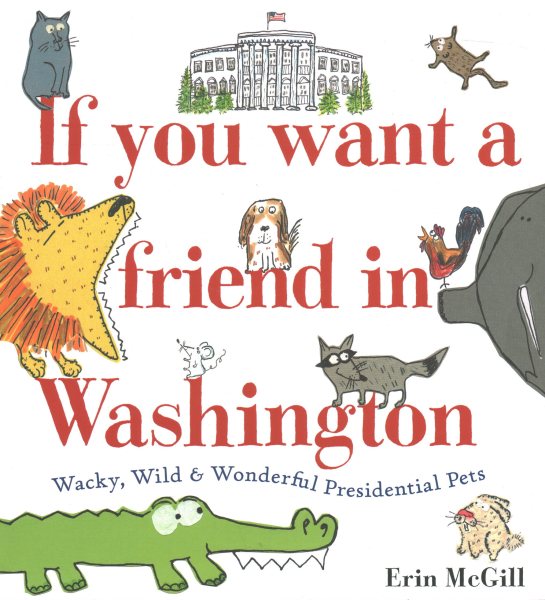 Staff Review: "If You Want a Friend in Washington" by Erin McGill

Explore a wackier side of life in the White House in this fun and entertaining book about presidential pets!

The President of the United States has a lot of responsibility and has to make hard decisions. Citizens and fellow politicians might agree, or disagree with these decisions, making friends hard to come by. Many presidents hoped for a reliable friend, and some of the most reliable friends are not human! President Harry Truman once said, "if you want a friend in Washington, get a dog." And a dog is what many presidents got. Dogs are by far the most popular pet of the presidents. I thought the best part of this book was learning about the names of the pets. Some of my favorite dog names were Veto Garfield, Rollo Roosevelt, Calamity Jane Coolidge, and King Tut Hoover.

If you think farm animals in Washington DC is bizarre, just wait! Some presidents had alligators, flying squirrels, silkworms, elephants, bears, and even a wallaby. There was even a pair of lions named Tax Reduction and Budget Bureau Coolidge. I have a new appreciation for Calvin Coolidge after reading this book - his pets had the best names in my opinion! Some of the wackier animal stories are included and were a joy to read.

I had no idea about the history of pets at the White House. At the end of the book, all of the presidents and their pets are listed. It's a fun and unique way to look at our presidents through something relatable - furry friends that we all love! Recommended for families to read together or any child interested in pets or U.S. Presidents.