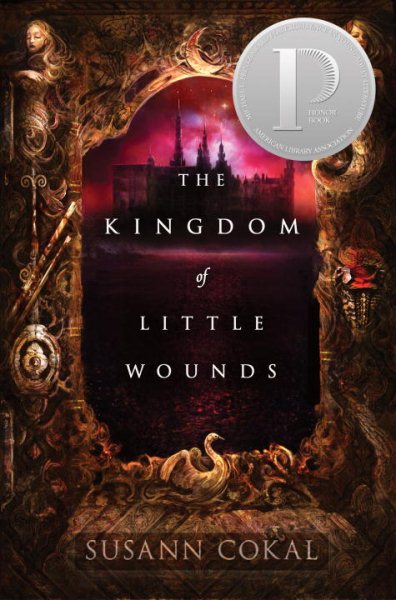 Susan Cokal's "Kingdom of Little Wounds" is not for the faint of heart. Some reviewers have proclaimed that this is not a book for teens, in spite of its Printz Award. The book charts the course of the imaginary Scandinavian kingdom of Skyggehaven beginning with the oldest living daughter's wedding to seal a treaty. At the wedding feast, the queen rips the bodice of her gown and the newest seamstress is ordered to sew it up. Instead of mending the tear, the seamstress succeeds in stabbing the royal skin and is demoted to nursemaid to the sickly royal children. Recruited by the royal spymaster, the seamstress tells a tale of treason that begins the unraveling of the entire court.

Set in the late middle ages, the story is told in three female voices: The seamstress, a voiceless slave and the queen herself. Additional narration is provided by an omniscient narrator and the whole is book ended as though it is a story told to princesses before bed. However, this is neither a fairy tale nor for the squeamish. The author paints a picture of a kingdom corrupted from within by disease, lies and superstition. While the royal children die one by one from their illness (strongly suggested to be congenital syphilis), the spymaster manipulates the rest of the court, including the King, who loves him, attempting and ultimately failing to gain the throne.

While the subject of the story is the manipulation of the court (ala "Game of Thrones") the author's realistic portrayal of life in a medieval court is well researched and well developed, down to the way the three women are used, and manipulated by the men around them, including instances of rape and coerced sexual contact. In spite of all these challenges, the three narrators ultimately succeed in finding some happiness and autonomy for themselves. But it is the writing that truly makes this book a masterpiece. The book truly deserves the Printz honor it received for the author's intricate plotting, dark setting and beautiful writing.