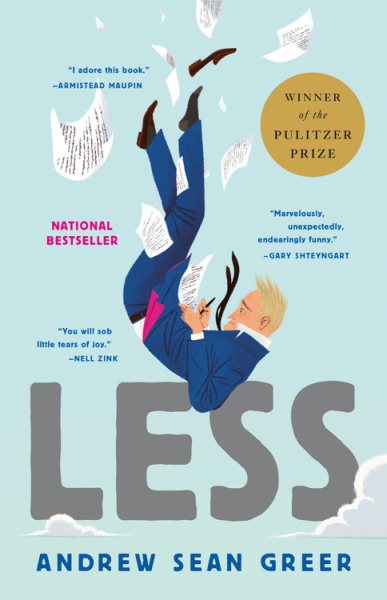 Arthur Less no longer wants to be in love. On the verge of turning 50, Less is a mildly successful author who has spent a large chunk of his adult life in relationships, only to get burned in the end. His book publisher also has passed on his most recent manuscript, putting him at a unique crossroads in his life.

To avoid attending the wedding of Freddy, his ex-boyfriend, Less plans a trip around the world. Usually one to avoid the spotlight, Less agrees to such engagements as interviewing a famous sci-fi writer in New York; accepting a literary prize in Italy; teaching a college course in Berlin; revising his latest novel in India; and writing a travel article in Japan. Included among these destinations is a stop in Morocco, where Less plans to celebrate his 50th birthday with a group of friends.

Peppered throughout the book, the reader learns about previous experiences in Less’ life, including how he began writing with a famous group of gay authors in his early 20s, how he and Freddy met and how his writing career declined in recent years. Peeling back these layers helps to better understand the threshold Less currently finds himself at.

The thing I liked most about this book is the author’s almost magical way of describing things. Less’ sad, conflicted feelings are also written so well that they are felt through the pages.