A Long Time Ago in a Cutting Room Far, far Away... 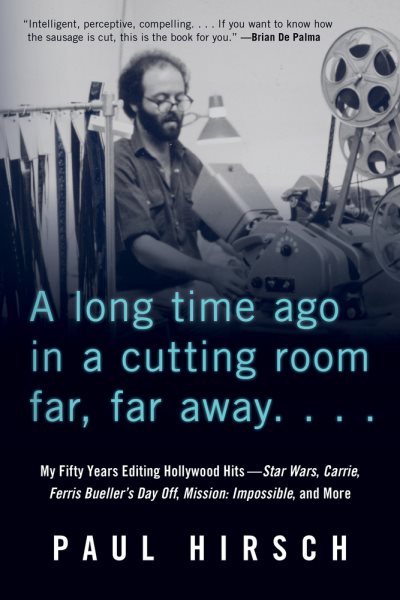 Staff Review: "A Long Time Ago in a Cutting Room Far, far Away..." by Paul Hirsch

Oscar-winning editor Paul Hirsch breaks down his career movie-by-movie, and in the process provides an inside look at an integral part of making movies, but one that seldom receives much attention.

Directors, actors, score composers and even cinematographers receive praise (or criticism) for movies they make, but the editor is the one responsible for taking all that film footage and music and cutting it together into a coherent picture. I knew very little about film editing before reading Hirsch's book, but we all know some of the movies he's edited: "Carrie"; the first two Star Wars films ("A New Hope" and "Empire Strikes Back"), "Ferris Bueller's Day Off"; "Planes, Trains and Automobiles"; and "Mission: Impossible".

Hirsch, in his own engaging way, recalls his experiences bringing to life the visions of directors like George Lucas, Brian De Palma and John Hughes, as well as working with legendary composers like Bernard Herrmann. But film buffs and anyone who aspires to work in the film industry will appreciate the technical portions of the book, with cut-by-cut descriptions of an editor's work when movies were still shot on film in the 1970s-1990s, on through the digital age of movie production.

You might expect an Oscar winner to come across as arrogant but Hirsch stops just short of that in his book: confident in his work, yes, but also still humble and grateful for the chance to work in pictures. That humility, along with an inside look at some of the greatest movies ever made, kept me turning the page from start to finish.