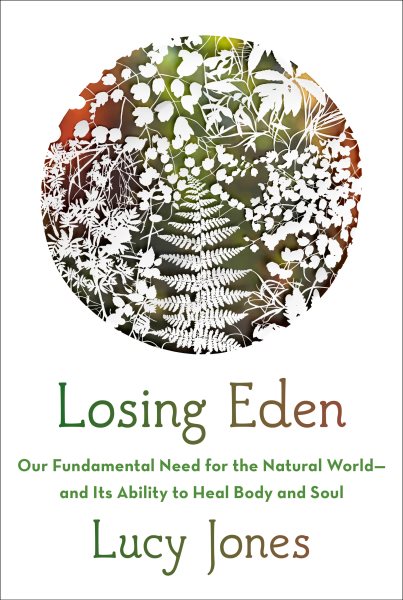 This book was not only a powerful call to action, but also a memoir of one women’s experiences in nature, and really, the author Lucy Jones wrote a love letter to the natural world itself. I found so many fascinating tidbits throughout, like how interaction with soil or walking through a forest actually raises the immune system. Or how looking at ferns has been scientifically proven to be relaxing to the human brain (which I can non-scientifically attest to!). A study even found that smelling cedar lowers your heart rate. More specifically, there are actually changes in the brain when exposed to nature, like “…lower levels of cortisol…reduced activity in your…prefrontal cortex, a small area in the cerebral cortex which is associated with sadness and negative rumination or brooding” (70). It also activates the parasympathetic nervous system, which has “…many benefits to our health, from emotional regulation to decreased risk of cardiovascular disease” (77-78). I found this information not only fascinating, but also an affirmation of why I seem to be so impacted by time spent in nature.

There’s even a link between green spaces and crime rates, Jones writes. Research shows that “…the greener a building’s surroundings were, the fewer the total crimes” (102). It even affects rates of recidivism so much that many prisons are now offering activities based around nature. As the author states, “Nature is not a luxury: its presence or absence creates and causes different health outcomes for different groups of people” (105). Further, “…If green space is equigenic, if a connection with nature can reduce social inequality and the health gap between the rip and the poor……a connection with the natural world….should be a fundamental human right” (113), which I thought was a really powerful statement.

But as Jones writes, natural spaces are in danger. So many of us have heard of climate change (in recent years especially,) but why is it so easily ignored by so many? Why is it, as the author states, “…easy to forget that we are a part of nature, and we only breathe, eat and drink because of it” (124)? Part of it is the language used, the author says, and I definitely agree. As Jones says, “'Climate change’ is too innocuous a description of what is happening to the planet. 'Extinction' doesn’t say anything about humanity’s complicity in global trends. Even referring to pigs as 'pork' or cows as 'beef' emphasizes our alienation and disconnection from the land and other living creatures” (133-134). She also talks about how “…we still see ourselves as takers and overseers, the authority figures, rather than being on an equal footing with the rest of nature” (134).

Why is it so important for books like this to encourage people to actually take action? Because “What happens in the Arctic doesn’t stay in the Arctic , it affects the rest of the planet…” (123). I also found it quite powerful when the Jones stated “Climate change will affect our mental health……It will directly expose populations at the front line to trauma, such as floods, vector-borne diseases and extreme heat, loss of homes, loss of life, loss of health and loss of ways of life and cultures” (123-124). What do we do with all this (somewhat overwhelming) information about the threat to our natural world? Act! Currently, there are “…no environmental laws that protect natural areas for public health” (161), which I found astounding. Overall, she ended with “….changing the way we design cities, how we protect other species in legislation and how we think about our health in relation to the wider environment will bring deeper, long-lasting change. Allowing the non-human world to exist on its own terms; treating other species, tees and land as equals, instead of underlings, must be the way forward. But this will only work if we fall back in love with the natural world and form a connection” (166).

As the author states, “Grief can be paralyzing, but it can also spur us into action” (125), which is how I felt after reading this book. Already vegan for several years due to the environmental, health, and ethical reasons, this book further fueled my love and appreciation of nature, and my desire to protect it. My only caveat with the book actually is that it didn’t really touch on the devastation caused to nature by animal agriculture and those who choose to eat animal products. But overall, this book packs a punch with its importance. This is a must read, and I hope the message is taken seriously by those who read it.