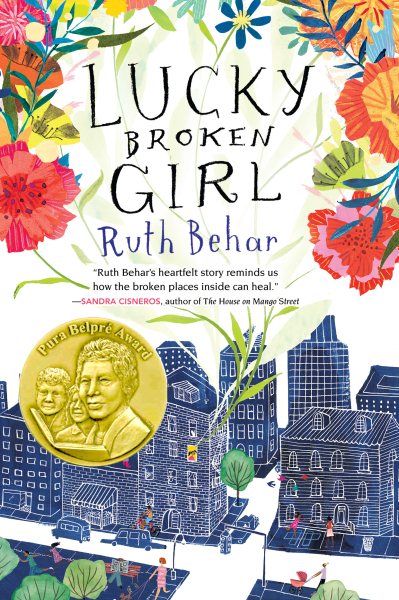 Ruthie Mizahi is the “lucky broken girl,” at least that’s what they call her after the multiple car accident in which she survived but several other people died. Being new in America from Cuba, she learned just enough English to graduate from the fifth grade "dumb class” at school, and just received her very own dream pair of go-go boots. Now she has to lie in bed in a body cast for months to try to heal her broken bones. She is sure that it is going to be so boring and she hates it, especially having to use a bedpan and rely on Mami, her mother, for her basic needs when previously she was so free and happy. What she couldn't have imagined were the many wonderful people who come to visit her and become friends who too are new to America. They share their stories, music, love of art, and their rich culture and language, giving her encouragement, inspiration and the fortitude to get well. I particularly liked the many different languages interspersed throughout the text and glimpses of rich diverse cultures. This book was different in that the main character is not your usual spunky, strong character we often see in literature; she’s brave all right, but she derives her strength and her optimism from the wonderful people she is lucky enough to meet along the way to recovery who inspire her and convince her that she can do anything. Written for tweens, this special book was such a joy. I highly recommend it.