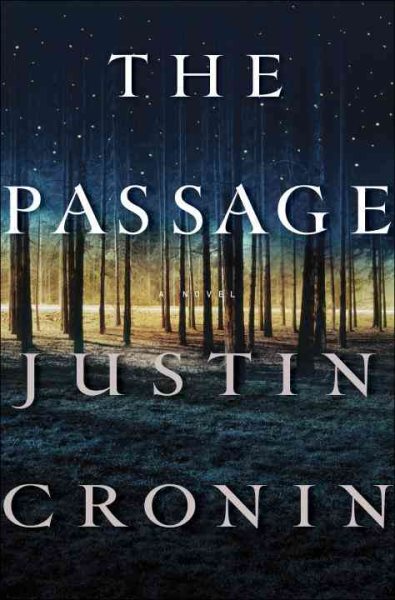 Not *just* another zombie-vampire-apocalypse genre novel (but yes, it is also that), "The Passage" tells an epic, century-long tale of the downfall of modern civilization due to a contagion that transforms humans into bloodthirsty, fanged, nigh-indestructible creatures of the night that the author graciously (though conspicuously) tries very hard not to call vampires (opting to call them "virals" instead).

*Of course* the virus's release is the result of an ill-conceived government experiment to reverse engineer an ancient virus discovered in South America (carried by bats, no less). *Of course* the remnants of humanity are reduced to living in high-walled medieval fortresses to fend off the undying hordes of virals that attack at night (and conveniently glow in the dark!). *Of course* there are adventuresome young people who go on a quest outside of the relative safety of their particular walled abode, hence the plot. Never mind these tropes; the author's beautifully nuanced writing and inspired portrayal of the scale and development of this particular apocalypse makes this novel definitely worth reading for sci-fi/horror fans and general audiences alike.

In "The Passage" and its trilogy (including "The Twelve" and "The City of Mirrors"), science-fiction and horror fans may note elements of Stephen King's "The Stand" (and "Salem's Lot"), Richard Matheson's "I am Legend" and even a little bit of Hajime Isayama's "Attack on Titan" (though the novel predates the manga). In fact, I couldn't help but think The Passage trilogy did far more effectively what "The Stand" promised to do, but couldn't quite accomplish -- that is, show (in a wholly satisfying way) the complete and sudden self-inflicted downfall of society and trace its survival and reincarnation from beginning to end.

Incidentally, "The Passage" has been adapted as a TV series for 2019. It remains to be seen whether network television and its constrains will be able to capture the story told by the novel as faithfully as one might hope.

reviewed by Ben Krombholz / IT Technician