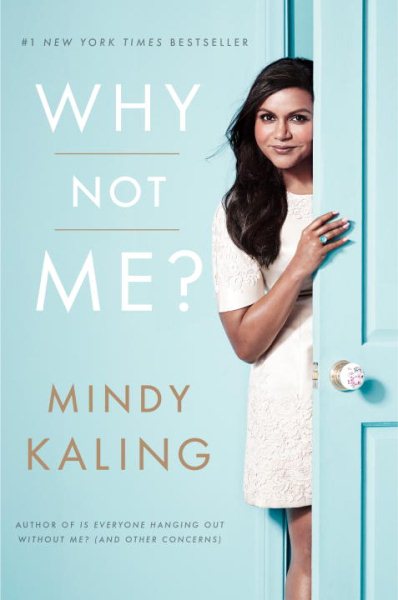 Staff Review: "Why Not Me?" by Mindy Kaling

As someone who was thoroughly entertained by actress Mindy Kaling's first memoir "Is Everyone Hanging Out Without Me?" I really looked forward to what she had to say in this follow-up. While this book didn’t quite match the humor and substance of its predecessor, it was still enjoyable to read.

Known as the star of TV's "The Mindy Project" and for her role as an actress and writer on "The Office,” Kaling's first book covered her upbringing and the path that led her to show business. "Why Not Me?" takes off from there and predominately features tales from Kaling’s college years at Dartmouth and her current life a TV writer, producer and actress. Kaling balances anecdotes about not fitting in with the sorority lifestyle while at Dartmouth followed by stories of meeting Barack and Michelle Obama and dating a White House staffer. Inclusion (or rather, exclusion) is a key theme of this book. Despite her success, Kaling still feels like somewhat of an outsider in the entertainment industry, as an Indian-American woman who doesn’t conform to the dangerously lithe body type Hollywood generally prefers.

Comprised of short essays, lists and diatribes, this book contains both hits and misses, but is still worth the read, especially for fans of Kaling’s work or for anyone who has ever felt marginalized.