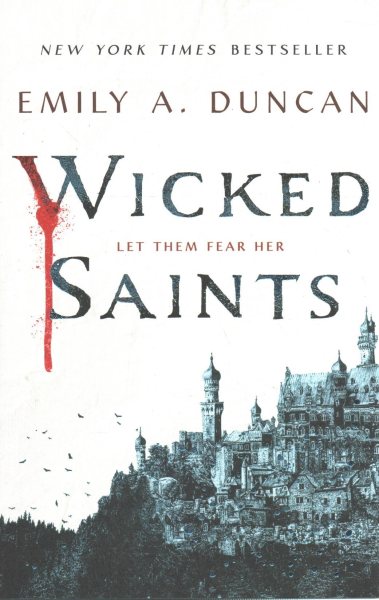 When I picked up Wicked Saints I thought I knew what I was getting into, boy was I wrong.

This novel follows three main characters, introduced as A Girl, A Prince, and A Monster. Full of twists and surprises, this book blew me out of the water and into someplace dark and unsettling. Set amidst a war between two neighboring countries, the conflict at its core is religion, with one nation wishing to purge religion from their lands while the other clings to their Gods and calls on them for guidance.

Nadya has grown up in a convent high in the mountains, raised knowing she is the first cleric in over 30 years able to use magic and commune with the Gods. She is the secret weapon that will hopefully win the war. Serefin is more soldier than Prince, having been sent to the front of the war by his father when he was only 16. Maneuvering court politics is something he has little experience in. On the fringe of it all is the elusive Malachiasz, whose only memory is his name.

Blood mages, a cleric, and a cult-like fleet of not-quite-humans known as Vultures weave together to create something magical and disturbing. A Girl, A Prince, and A Monster all become a part of something larger, an ambitious quest for power and magic that brings both nations to their knees. If you're looking for a book that will shock and surprise you, Wicked Saints will grab you and won't let go.